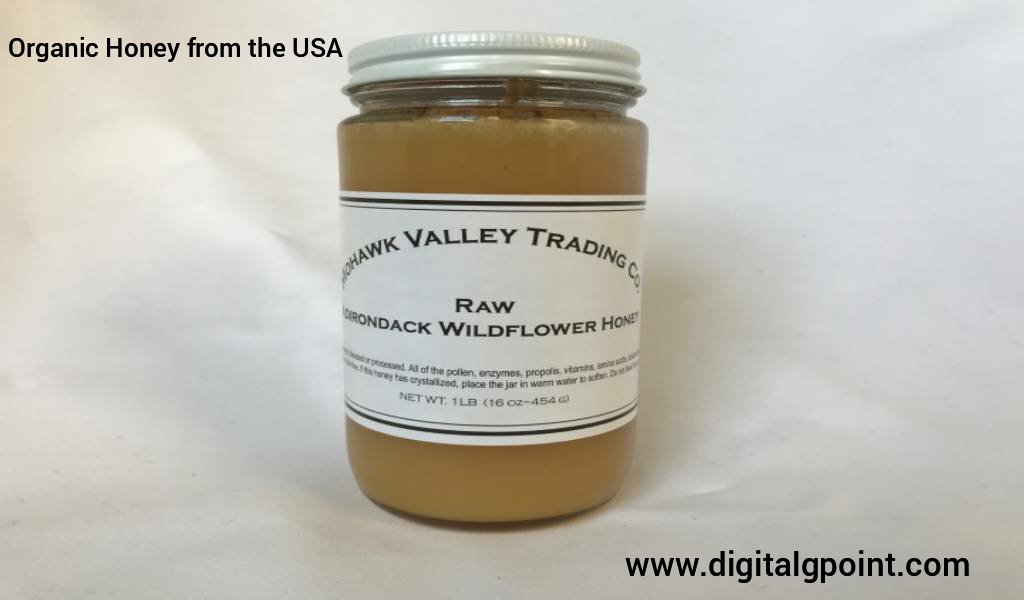 Raw Adirondack Wildflower Honey with cappings from Mohawk Valley Trading Company is not labeled as organic honey; however, it is as organic as you going to get from The United States. Plus, the higher amount of propolis and pollen in raw honey with cappings makes it highly sought after by health-conscious people looking to maximize the health benefits of raw honey.

Some of the information in this article originally appeared here and has been republished with permission:

Adirondacks, NY — According to the Seattle Post-Intelligencer: “Government, academic and industry experts insist that U.S. organic honey is a myth. With rare exceptions, this country is too developed and uses too many agricultural and industrial chemicals to allow for the production of organic honey. Like other foods from free-roaming, wild creatures, it is difficult–and in some places impossible–to assure that honey bees have not come in contact with prohibited substances, like pesticides,”

According to the Scientific American: “Organic honey isn’t impossible. It’s just beyond of the ability of most beekeepers. Bee yards situated in isolated spots deep in the Adirondacks, or mountain valleys in sparsely-populated New Mexico, can probably pull off honey free of agrochemicals. Most beekeepers operate within a bee’s flight of pesticides, however, making “organic” honey an illusory proposition.”

Honey has been used by humans since prehistoric times for its health benefits, healing properties and as a sweetener of food and beverages. However, if honey is to be used for its health-benefits, it must be raw honey. Heating honey (pasteurization) destroys the all of the pollen, enzymes, propolis, vitamins, amino acids, antioxidants, minerals, and aromatics. Honey that has been heated and filtered is called commercial, regular or liquid honey.

Cappings are small particles of propolis, flecks of honey comb and grains of pollen that pass through the sieve when raw honey is strained. Propolis has used by humans for eons by many cultures for its health benefits and as a traditional, natural or homeopathic medicine to treat wounds and for problems ranging from itching to cancer. Propolis has been shown to have antibiotic, antiseptic, antifungal, anti-inflammatory and antiviral properties and is effective against streptococcus bacteria.

The higher amount of propolis and pollen in raw honey with cappings, makes it highly sought after by health-conscious individuals looking to maximize the health benefits of raw honey.

The flavor and color of honey is determined by the type of flower the bees gather the nectar from, therefore, honey is usually classified by the floral source of the nectar from which it was made.

Monofloral honey or varietal honey is made primarily from the nectar of a particular type of blossom or flower resulting in a distinctive flavor and color because of differences between their principal nectar sources. To produce monofloral honey, beekeepers keep beehives in an area where the bees have access to only one type of flower.

Wildflower honey, also known as polyfloral honey, is derived from the nectar of numerous species of flowers or blossoms. The taste, aroma and flavor will vary from season to season, depending on what flowers are dominant at the time the nectar is collected.

Sometime after the last frost and before the first frost of the year, the Mohawk Valley Trading Company places bee hives in remote areas “deep in the Adirondacks” of New York State and this is the source of their Raw Adirondack Wildflower Honey.

Although Mohawk Valley Trading Company Raw Adirondack Wildflower Honey is not labeled organic honey; it is about as organic as you can get from The United States for the reasons stated at above.