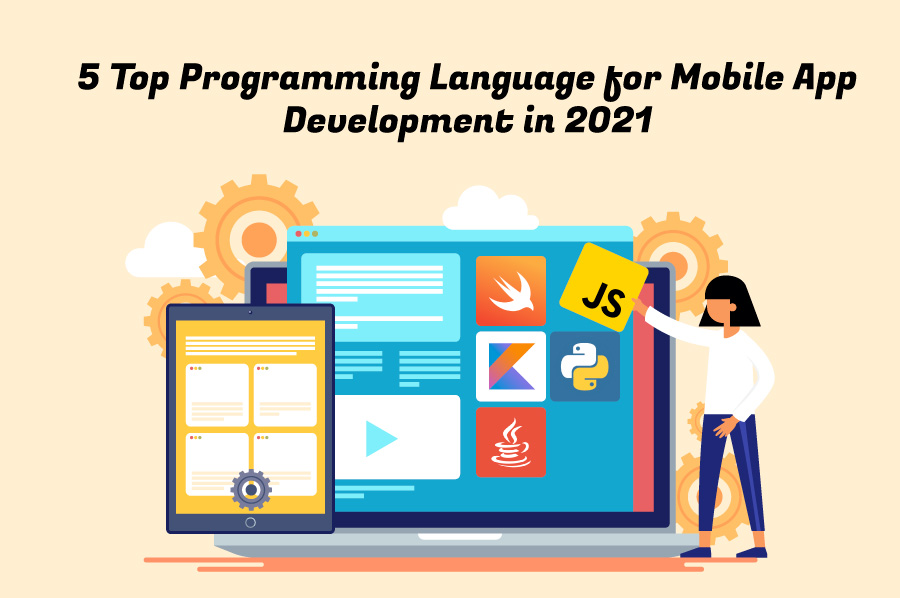 There is no absolute answer for which language is worth investing your time and money in. The application’s objective, OS platform, target audience, etc., are some features that need to be considered. If you are unaccustomed to the process of mobile app development and are puzzled about where to begin, here are the five languages that top app developers use.

An android app development company adept in JavaScript can deliver applications that are versatile and easy to work with. JavaScript can be parallelly employed with other programming languages to improve the functionality of the application.

The features that make JavaScript a universally accepted language for app development are:

If you are looking for iOS development, Swift is where you should begin. Although relatively new, Swift has risen in popularity due to its performance and profitability. Swift’s IDE- Xcode is self-reliant and assertive. The language is also easy for developers to read, learn and code. It is a type-safe language that allows developers to catch errors easily. Additionally, Swift can also be applied to the server-side. It has surpassed Objective C in popularity, speed, features, and performance.

Some of the essential features of this programming language are:

You May Like: Are Coding and Programming Same or Different?

The reasons that make Kotlin so popular amongst app developers are:

Python is an open-source language known for its flexibility. It uses less code than other languages making it easy to learn and compile. Python has been used by YouTube, Reddit, and Instagram for general-purpose programming. This server-side language can be easily integrated and requires low maintenance. It can also be used in association with other programming languages to yield interactive and scalable applications.

Some features of Python are:

Java is one of the most popular mobile application programming languages used by leading companies like Twitter and Spotify. Java is a platform-independent language used by multiple startups and tech giants. The reusability of source codes is a significant advantage of Java. Moreover, the language is easy to learn, use, read, compile, edit or debug. This makes Java a favorable option for android app developers India in need of a reliable object-oriented programming language.

There is a large and active community of Java developers offering comprehensive documentation and support. The open-source libraries of Java can help in the rapid development of applications. Some other advantages of using Java for mobile app development are listed below.

The mobile app development industry is ever-evolving, with better technologies coming up with every passing day. It is essential to be aware of which languages are performing well in order to develop robust applications that can compete in the market. There are several programming languages used by android app developers India such as C++, Ruby, Scala, PHP, Rust, etc. Java and Kotlin can be used for android, while Swift can be used for iOS devices. If you wish to develop a cross-platform application, go for more mainstream choices like JavaScript. The programming languages mentioned above are expected to stay relevant for a long time to come, making it worth your while to learn or invest in them.